L’Arche Boston North owes its continuous success and community growth to its committed office staff. These staff members are important members of the L’Arche family – they handle day-to-day operations while keeping L’Arche organized and running.

Jennifer Matthews came to L’Arche Boston North in 2006. She started her L’Arche career as the office manager and went on to serve as the Program Coordinator in 2007 and Community Leader in 2017. Jennifer is currently working towards her Masters of Social Work Degree at Salem State University. Jennifer is married with two children, Jackson and Ben. Her family also includes two wonderful dogs, Riley and Ranger.

Vanessa is a native of Massachusetts; however, she learned about L’Arche while living in Washington, DC, working as a case manager for the Office of Aging and Disability in Arlington, Virginia. There she was assigned case management of L’Arche Highland House, and it wasn’t long before she was won over by the gentle nature of assistants and Core Members. After deciding to move back to the Merrimack Valley in 2008, it seemed natural for her to connect with the Boston North community and begin sharing time as an assistant. In her many years here she has also served in the role of Head of House and currently is the Community Coordinator. In her free time she enjoys spending time with her nephew and mentoring youth at her church.

Michael joined L’Arche Boston North in the spring of 2013.  He was an occasional volunteer who wandered into a community that he now joyfully calls home. He has lived and

shared time at Assisi House as first an Assistant, and then House Manager for almost 3 years. Michael was promoted to the Program Coordinator role in July 2017. When Michael is not spending time in community, he enjoys traveling, reading, hiking, and spending time with his family, particularly his two nieces.

Molly came to L’Arche as an AmeriCorps volunteer in 2011. She

loved living at Gandhi House and stayed on to become Head of House and later to attend graduate school at Merrimack College while working collaboratively with a team of Core Members to investigate the concept of Meaningful Day. She spent 6 months as a volunteer at the L’Arche community in Kolkata, India, and returned to live as an assistant at Pat House. She is a member of the L’Arche USA Inclusion Team and the L’Arche International Faith and Culture program.

Tammy Gagnon came to L’Arche in 2016. Her hard work

and dedication to our community keep us on a strong financial footing, and she is always available with a listening ear whenever anyone in community needs help. Tammy enjoys spending time with her family, particularly her four children, and is a woman who practices her faith with strong conviction.

Nicole originally joined L’Arche Boston North the Summer of 2013 as the House Manager of Peace House. While Nicole left her full time role in Community to run a food pantry, L’Arche remained in her heart and she was a relief assistant when Community needed her.  Nicole was excited to come back to Community full time in the Summer of 2018 as House Manager of Pat House.  When not in community, Nicole enjoys reading, traveling and spending time with family, especially her nephew.

Sara is the House Manager a

t Peace House.  Sara was introduced to L’Arche by a priest, who gave her a book titled The Fountain of Tears by Jean Vanier. Over time, Sara began to reflect on Vanier’s words.  Sara became a part of L’Arche in July 2007 when she joined the L’Arche Boston North community as a live-in assistant. She is originally from Peru-Amazonas. Sara worked in Lima-Peru for 4 years as a kindergarten teacher and in Ecuador-Santo Domingo de los Colorados for 1 year with children with malnutrition. She has a degree in Psychology. When she is not working, Sara enjoys spending time with her family and friends.

Ariana joined L’Arche Boston-North in 2008, having being a friend of community for several years. She has held a few different roles in community and has been an assistant in all four homes at one time or an

other. She became Head of House in 2011 and tries to use her experiences as an assistant to better live out the HOH role. Ariana has truly made L’Arche her second family, with Core Members and assistants often being a part of her family celebrations and Holidays. This community is so blessed to have her!

Mary visited L’Arche in Washington, D.C. for dinner in 2015, and was impacted by the way the core

members and assistants truly lived out the mission to celebrate the gifts and abilities of all people.  She visited their community many times in the following years, and lived there as a volunteer in the summer.  After completing her degree in Psychology in 2018, she joined L’Arche Boston North as a live-in assistant at Assisi House and would go on to become the Head of House there.  Some of Mary’s favorite things to do with core members are go for walks on the beach, go out for coffee, and play soccer or basketball outside Assisi House.  When not sharing time at L’Arche, Mary loves to try new recipes, hike, and go for bike rides along the coast. 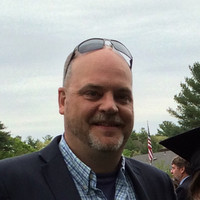 Middlesex Community College to study Hotel Restaurant Management. He joined Marriott and worked for  17 years in positions in Food and beverage from Banquet Captain to Restaurant Manager. For the next 17 years, he worked as Restaurant Manager, General Manger and Regional Restaurant Manager for casual and fine dining concepts. For 2 weeks out of  every year for the past 7 years, he has volunteered at Joni and Friends New England, where his passion for food was combined with vision to develop an establishment to train people with all abilities to work in food and beverage industry. Recently, Scott worked in a group home in Lincoln through NuPath. “As I start a new adventure as Homemade Hummus/Culinary Program Leader with L’Arche Boston North, I am excited for this opportunity for my passion and vision to assist people with all abilities to achieve knowledge and training to pursue careers in restaurants. I have lived in Billerica, MA, for over 26 years with my wife of 31 plus years, Wendy. Cooking for others brings joy to me. I enjoy cooking for 4 children once a week.  My interests include golf, reading, and sports. I am involved at Grace Community Church, where I volunteer and serve on board as an elder.”